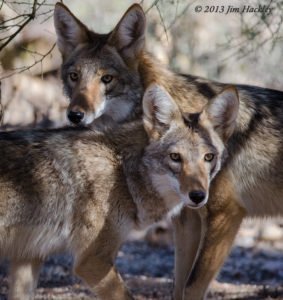 When a wildlife tragedy occurs ….

I always want to take it as an opportunity to educate, and not point fingers. And so, a wildlife tragedy occurred in Chappaqua, New York this month of June. As the story has been told, a female coyote killed a person’s dog and was aggressive to another dog being walked on a leash in a comfortable development over seen by the homeowners association.

The immediate response was to call up Federal Wildlife Service to come, trap, and kill whatever coyote landed in the trap.  And they did so without delay, saying that the coyote they killed they thought was “the one!”

This knee jerk response to kill our fellow beings has no place in a society where education regarding our native wild dogs is available in perfusion. But why educate oneself…killing is easier. This sad event reminds me of another event that took place just a few years ago in Ohio when Wildlife Services decided to kill a coyote for some unknown reason of their own, saying that she had rabies. Well….she didn’t! It just so happened that it was May, and she was the alpha mother who had just given birth to her pups.

This family of coyotes lived in the Cleveland Metroparks, visited by many people…biking, hiking picnicking, etc. No one ever saw any member of this Coyote family. They were very reclusive. But after the mother coyote of this family was killed, the whole family went “into chaos” as the lead biologist described it.  Once never seen by people, they began running after people on bikes. But….instead of killing the coyotes, the biologists roped off their territory, not allowing any person to be there. They then allowed the coyote family to recover from their loss, and they reverted back to their reclusive behavior once again.

Such a difference between Cleveland, Ohio and Chappaqua, New York!

So the question is ~ why was this coyote in New York aggressive? Was that question ever asked? What time of the year is it.? Oh…pup raising time! Coyotes, like all canines love their pups, and are very protective of their little ones….especially from domestic dogs. Was there a den near by, that she was seeking to protect? What small changes in human behavior would have given the coyotes their sense of safety?

What could have been different in Chappaqua?  What have they taught their children?

Killing is the answer!

They could  have taught them to ask:   How should we change OUR behavior?