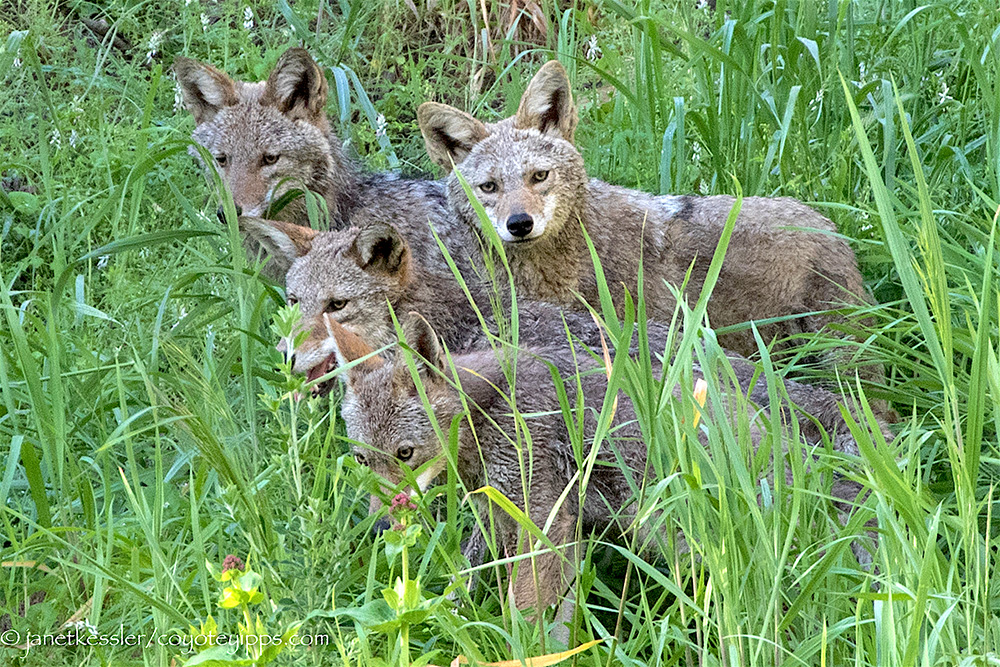 Here is a phrase I all too often hear regarding the numbers of coyotes on the landscape ~ We need to CONTROL their numbers.

These words are packed with a world view brought here from Europe that believes our species has the right to control other life as we see fit. But what is deeply flawed about this world view?  It is the perspective that our species completely understands the complexity of how all Life on our awe inspiring planet interacts and survives with one another.

Our species is the new comer in this circle of Life. And highly evolved and complex social species like Coyotes have had 5 million years to figure out the best way to survive. And one of THE most central and essential aspects of their lives is  why and how they practice BIRTH CONTROL.

To begin with, Coyote’s territory ~ Only ONE family lives there. The reason being, there is only enough food for that one family. That territory cannot support a large and ever increasing number of Coyotes.

So Coyotes practice strict birth control. For one, the mother can become pregnant only ONCE a year for a very short period of time in late winter.  Our domestic dogs can become pregnant more than once a year and at diverse times of the year, for survival and having enough food is not an issue for them. But it is for coyotes.

The mother’s ability to become pregnant and give birth to healthy strong pups is dependent on how much food is available to her. So in difficult times she may miscarry her unborn pups or her pups may be born very small and weak, and often not survive. In times of abundance she may give birth to healthy robust pups whose chance of survival is much greater. And there will be adequate food available to hunt for the growing pups.

So why is it also that I so often hear There are too many Coyotes. Any person who makes this statement most often is expressing it from a sociological point of view…a view from their own personal perspective. Whether there be 50 Coyotes or 5 in a particular area of land……would not matter to this individual….
0 Coyotes would suit them the best.

An individual who perceives Coyote’s population in this way may take what they observe in a world they are familiar with and apply it to Coyotes. That is, they observe that our human population is out of control, our domestic dogs and cats can and do breed all year long with the tragedy of overpopulation caused by humans, as well as observing herbivores of all sizes breeding and only controlled with the predator prey system on our planet, or by human poisons and killing.

So it is these individuals who intellectually do not understand that COYOTES CONTROL THEIR OWN POPULATIONS, but sociologically refuse to accept it.  The European perspective of CONTROL is still alive and well on our continent

Do we as humans need to control Coyote populations?
The answer is: ABSOLUTELY NO!
Coyotes have been practicing effective birth control for millennia!