In Honor of Dahlov Ipcar

In Honor of Dahlov Ipcar 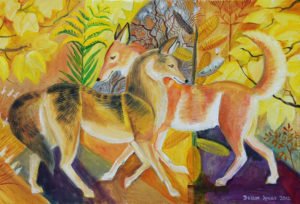 ” I feel that it is up to the artists of the present to reveal new ways of seeing the world
and to create new worlds never before seen.”    Dahlov Ipcar

Dahlov Ipcar, Beloved Maine artist, passed away on February 10, 2017 at 99 years of age. She was still painting on the morning of her death.  As a biologist I had the immense pleasure and honor of knowing her.

In 2012, I visited her in her studio in Georgetown, Maine. She was 95 years old at the time.  Her son Bob, encouraged me not to stay too long so as not to tire her. So after an hour I was going to leave, but she wanted me to stay and keep chatting. Such a gracious and warm woman.

The reason for my visit ~ I was going to cautiously ask her if she would like to participate in our I Am Coyote art exhibition in the Fall. Well….. the following is a quote from her describing where she went from there. (At the exhibition, each artist was asked to just make comment about their art piece…not to explain it…this was hers)

“When I was first asked to paint something for the Coyote Art Show I was reluctant — not liking to work “to order” — and I put it out of my mind; but a few weeks later I awoke from a nap with the complete picture in my mind.  I made a small “thumbnail sketch” of my idea so I wouldn’t forget it. Then two days later Geri Vistein phoned me, and that clinched it. In some strange mystical way it seemed preordained, and so here it is as I dreamed it.”

And so you see above the art piece she created ….. honoring Coyote!