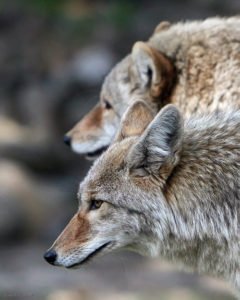 Much research is being pursued on Coyote’s fellow carnivore, the Mountain Lion. If you go to my page on this website with Journal Article links, you can view a film detailing recent research on the affects of uncontrolled  human killing of these great cats.

One of the grave concerns of biologists, is the lack of GENETIC DIVERSITY that is happening as a result of this unrestrained killing. AN EXAMPLE ~ In the state of Nevada, individuals are free to kill cougars YEAR ROUND ……does that not sound familiar to what Coyotes endure as well.

But what happens as a result…..well many complex reactions happen…..the carnivores relationship to their prey, their habitat, and increased conflict with humans. BUT IN ADDITION TO THE BREAKDOWN OF THESE COMPLEX RELATIONSHIPS…. BIODIVERSITY IS LOST….AND LOST FOREVER. WHY?

In the terms scientists use, carnivores that disperse into an area where they are systematically killed in great numbers  by humans, is referred to as a SINK.  And where carnivores have emigrated from is called a SOURCE. So if carnivores like cougars immigrate to a sink…..none will emerge from it, and immigrate to another area….so vitally important to the healthy genetics of our carnivores.

So what is happening to Cougars, is also happening to Coyotes that are killed year round by individuals here in Maine…..complex relationships with their prey, the ecosystem and us…change. AND THE HEALTHY GENETIC DIVERSITY OF COYOTES CANNOT, NOT BE AFFECTED.

INDISCRIMINATELY KILLING CARNIVORES HAS SERIOUS RESULTS….WE WANT TO CREATE A NEW CONSCIOUSNESS IN OUR CULTURE THAT WILL CHANGE KILLING TO PROTECTING.