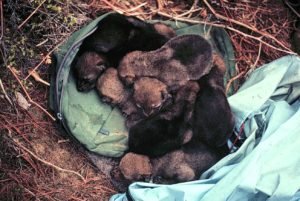 COYOTE PUPS ARE BORN ONCE A YEAR IN THE SPRING

They are tiny, blind and helpless, depending completely on their mother and their father for survival.

Coyote parents are completely devoted to their pups ~ keeping them warm, fed and protected from danger. They will do everything in their power to help them survive.

BUT….. what happens if one or both of the parents are killed during this extremely vulnerable time in their lives? If the father is killed by humans, then the mother (who NEVER leaves her newborns) is forced to leave them and hunt for food for herself so she can survive. If she is forced to do this and she is killed…….it is certain death for all their pups…a death by starvation and hypothermia. And it will go on unnoticed in hidden away dens where no one can hear their cries and whimpering of suffering …calling for a mother who cannot return.

See below a link of just such a scenario….except….this mother Coyote gave birth to her pups under a family’s porch…and her whimpering dying pups were heard. And again this week in Cape Elizabeth, Maine a tiny coyote pup whose eyes were still not even open was found in a person’s backyard ALONE. What happened to the pups mother and father? These are manifestations of a hidden violence to this species.

KILLING COYOTES YEAR ROUND speaks of an immense disrespect toward the suffering of this intelligent, highly social being. LET US HONOR THEIR DESIRE TO LIVE.