Our Native Americans and Coyote

Our Native Americans and Coyote 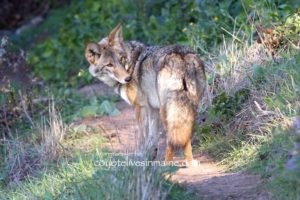 “We shall take your Land…and you will soon disappear.”

This is how the white man that came to the American continent thought and spoke regarding our Native Americans here in Maine ~ the Penobscots, the Paasamaquoddy, the Micmacs and the Maliseets (and Native Americans across this continent).

They did steal their land, but our Native people did not disappear. And here in Maine, our Native Americans lead the way to a rebirth of their people in the last quarter of the 20th century.

And it just so happens that in that last quarter of the 20th century, Coyote expanded their range to Maine and beyond. The white man had said the same of our carnivores, “That we will take away your habitat, and we will kill you, and you will disappear.” Sadly many of our carnivores live on the brink of existence due to this continued behavior of the white man.

But not Coyote! Coyote is a great symbol of the rebirth of our Native people in Maine…..together they have survived and will not disappear. So Coyote is like the New Wolf  for our Native people who once lived with wolf here in Maine. In fact, Coyote may be carrying the wolf genetics of the descendants of those who once lived here….picked up on their journey through Canada.

Coyote is a great symbol of REBIRTH of our Native People…… and if we are open…. a rebirth for each one of us……