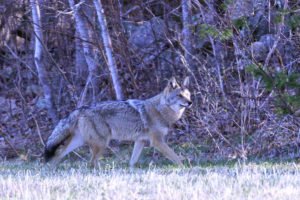 I received a letter from a woman in our Maine community, sharing with me an experience that left her feeling a loss of something beautiful in her life ~ Coyote’s Song.

She and her family delighted in the nightly serenades, until one day someone came along and killed the entire coyote family…with the exception of a tiny pup left alone, and possibly never survived. These are her words:
“I don’t hear them anymore; it has been terribly quiet. I have felt such a deep loss since that day. I was angry…the Coyotes NEVER hurt anyone or their livestock in out town.  Never would anyone complain that coyotes had made away with their domestic animals. But what I didn’t expect to hit me was THE SILENCE. I met a single little pup one night after the killing, playing on the side of the road. and then a couple nights after that. That I will never forget! I don’t know what happened to the little guy.
Missing the Sounds of my coyote friends…“
Categories: "Writings" from the Community, BlogJune 13, 2012Leave a comment

An Artist’s Expression of the Other ~Coyote
April 7, 2021