Speaking up for Coyote

Speaking up for Coyote 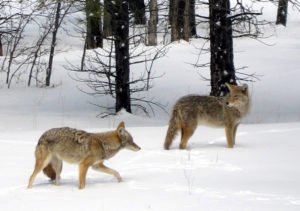 Coyote Mates ~ they mate for life….until death do they part… And too often here in Maine, death comes long before they have the opportunity to grow old together.  And why?  …..Because our laws do not protect this important carnivore from violent human behavior. And as each legislative session meets in Augusta, a violent, small faction of individuals who think they can control our legislators,…present more bills to increase the cruel exploitation of our Coyotes here in Maine.

And so this year….it is LD 96  …..wanting to put into law a bounty now on Coyotes, and extend the barbaric practice of trapping by two more months ….it would then be from October 15 to February 15.

HAVE ANY OF YOU EVER OBSERVED THE EXCRUCIATING AGONY AND TERROR OF A COYOTE CAUGHT IN A TRAP…..AND IN THE WINTER, EXPOSURE TO THE EXTREME COLD?

I am attaching here a copy of the summary of this bill as well as a testimony of a Maine citizen before the Inland Fisheries and Wildlife committee this past week.  I encourage all of you to contact your Senator and Representatives that go to Augusta,  and tell them that you want to see bills up before the Legislature that give protection to our Coyotes not take away protection, and that you want them to vote this Bill down. Do you know how powerful your email is!

15 This bill does the following:

16 1. It authorizes the Commissioner of Inland Fisheries and Wildlife to adopt rules to

18 2. It provides that coyote bounties be paid from federal funding received from the

20 3. It sets a coyote trapping season from October 15th to February 15th.

Committee, my name is Ron Joseph. For 33-years, I worked as a professional wildlife

biologist for the Maine Dept. of Inland Fisheries and Wildlife and the U.S. Fish and

As the State s regional Wildlife biologist in Greenville in the late 1980s, I supervised the

coyote control program in the Moosehead Lake region. I understand the importance of

and pop convenience stores. I also understand why this committee is tempted to continue

efforts to kill coyotes to maintain deer numbers. I am not opposed to killing coyotes.

However, for several reasons, I am opposed to killing coyotes with public funds. First,

coyote control is ineffective. We have been killing coyotes in Maine since the 1970s, and

the deer herd has still not recovered in eastern, western, and northern Maine. The coyote

has been and remains the scapegoat for Maine s deer ills. Re-building the deer herd can

only be accomplished by protecting deer wintering areas. Second, trapping and snaring

coyotes maims and kills non-target animals. I have walked trap-lines with trappers who

have accidentally killed bobcats, deer, and bald eagles. Third, the history of coyote

control has proven to be a waste of state money. There were 13,000 coyotes in Maine in

coyote population has either remained unchanged or slightly increased.

According to former State Representative Linda McKee of Wayne, between 1985 and

$680,000 spent killing coyotes during a 17-year period. Coyote control ~ as tempting as it

is — does not work. With coyote populations today at or above the 1985 levels, let the

numbers help you decide your decision.

Finally, LD 96, as written, proposes to use Federal Pittman-Robinson Act money to pay

for the state s coyote bounty program. Two weeks ago I sent an email to Amy Winston —

Committee Analyst —- to inform her that using P-R Act funds was illegal. Pittman-

Robinson provides Federal aid to States for management and restoration of wildlife,

hunter education, and acquisition and improvement of wildlife habitat. It does not pay

for predator control. If this Committee pursues a coyote control program, the money will

have to come trom Maine citizens. It makes no sense in these lean budget times to

For all the above reasons, I encourage you to vote against L.D. 96.