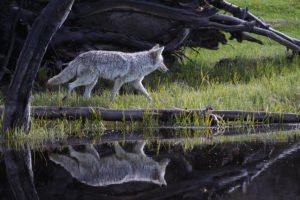 HOW DO WE RESPOND TO THE MEDIA ~
when it seeks to demonize our carnivores, especially Coyote?

Here we are in the Spring time of Maine. And along with all the songs of our returning birds and the peepers in our ponds, I began  hearing from a number of concerned Maine people.  They were in disbelief of an article in the Portland Press Herald demonizing our Coyotes.

The intent of the article was clearly to turn our people against this important carnivore. But instead, I was impressed that our people saw through it, and wanted the true nature of Coyote to be expressed in our media.  I was requested by many to write a letter to the paper in order for it to be published.  I initially resisted, for I have always believed that that citizens of a democracy are the ones with the power….and their voice has power.

But I soon responded to their request. So here is my letter to the editors of the paper and…to the community ~

I am writing the following letter due to an article in the Portland Press Herald  titled “Maine’s Coyotes getting Bigger, more Wolf like,” written by Deirdre Fleming on May 7.

As a Conservation Biologist practicing here in Maine, my work focuses on carnivores, more especially Coyote. I collaborate with fellow biologists here in Maine and throughout the United States in order to bring the science we know about Coyotes and other returning carnivores to our people all throughout Maine.  When our people understand the ecology of this important predator and learn the skills to live well with them, their lives are enriched on many levels.

So I believe I owe it to the people of Maine to write this letter. For one, many people have contacted me in disbelief that such an article, which breaks all the rules of ethical journalism, demonizes this important carnivore. The reason being, all these persons have knowledge of Coyote’s importance on our landscape. They have educated themselves.  And these Maine citizens are from all over the state:  fifth generation Mainers living in northern Maine, business people, teachers, musicians, my fellow biologists, and journalists as well, to name a few.

It is time that we move on in our evolution as humans, and leave the medieval human thinking and behavior behind us.  Demonizing important carnivores was the norm in medieval times. The wolf was “the devil.” Back then our species had no knowledge of the importance of Nature’s creation of the predator prey relationship. And that same European world view was carried to the American continent 500 years ago.  In our time, we have come to understand the immense value of carnivores, sadly after millions of them have been slaughtered in our country.

There are dire consequences to this continuation of medieval behavior.  The predator plays an important role in keeping the population of herbivores in balance, and by doing so protect all species from disease, and that includes us.   Disease: Lyme disease; we have an epidemic of Lyme disease and it will not go away until balance is created on the landscape once more. And the predator is needed for that!

In balancing herbivore populations the predator supports the health of the herbivore populations but also protects the “green” world from being devoured by them. When this happens, and this is especially the case when deer numbers are out of balance, other species who require those “green” spaces struggle to survive or disappear. We are talking about our birds, our bees and many other small species that require green places for their habitat.

Maine once was home to the wolf and the cougar as well as many other species that are no longer here, due to the actions of those who came before us. And the entire wolf population of our country was systematically slaughtered by the mid 1920s.  Coyotes, the ancient survivors of our continent then expanded their range, moving into all areas of this country where wolves once were. Nature will not allow an empty niche that is so important.

On their way to Maine, the western Coyotes who are the ancestors of our Maine Coyotes met up with the persecuted wolves who were struggling to survive in Algonquin Provincial Park in Ontario Canada.  They are very close to each other genetic wise, so as a result they are capable of mating with each other, and they did. Their descendants then found their way to New England. I find it most curious that this article speaks of the Coyote as a “non-native” species. Coyote are the oldest indigenous species on our continent and they have been trekking all over this continent for over a million years. How do we know? Archeological research has found their bones here in the East and as well as in the Tar pits of California.

A great deal of genetic research has been done on our Eastern Coyotes. We are finding that Nature is “selecting” for a Coyote that will be able to survive and perform the important work of the carnivore in our human dominated world.  So let us honor Nature’s wisdom in our Eastern Coyote!

So I ask you ~ why demonize this important carnivore with the propaganda of prejudice and fear? Is there not enough of that in our world?
As scientists we can bring you the knowledge, but you must act on it.

What do you wish to hand down to your children?

Coyote and Every Scrap of Biodiversity
November 12, 2019
Go to Top