Learning where the Food is!

Learning where the Food is! 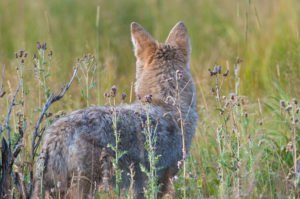 Coyotes, like us, learn to have a taste for certain wild foods…the ones their parents teach them to hunt.  Thoughout their lives they will continue to eat those foods, and then pass that taste onto their own future pups.
And this is why it is so important that they have a stable upringing. But our behavior as humans can greatly influence their food choices.  In our western states where wolves are present, it has been found that removing the carcasses of cows that have died on the range greatly affects the wolves’ attraction to cattle herds. In fact it is one of the most highly recommended actions to take to deter predation of livestock by wolves. It just puts a halt on their learning to visit livestock areas for food.
Coyotes, like wolves, don’t look for food randomly….they repeat their successful journeys. They learn very fast, and they teach others. So I have a question for you.  If we know that leaving the bodies of dead livestock out in the field will draw wolves and coyotes, why is it that it is legal here in the state of Maine for individuals bent on killing coyotes, to bait them with the body parts of livestock….like cow heads, chicken, sheep and pigs….placed either in a meadow on a farm or in the forest just beyond the farm?
These individuals are placing the farmer’s domestic animals at great risk.  They draw coyotes closer to the livestock, then give them a taste for that livestock…a taste that they would never seek otherwise. If this behavior goes on at the time of the year that coyote parents are feeding their pups…this may begin a conflict that would never have to be.
What happens? … Coyotes may then go after live animals, because they have acquired the taste. The scenario continues….retribution….the hunting down of the coyotes.  Their family then goes into chaos, they disperse and run for their lives. And wherever they go, they spread the knowledge of what livestock tastes like….and it will continue and spread. This is not just an imagenary scenario. All of the above human behavior towards wolves in the West has caused this escalating conflict. Let us learn from this!
Our behavior either drives us toward conflicts with Coyotes and other carnivores, or gives us a way to avoid conflict and coexist in peace. Which behavior would you choose? My final comment as a biologist here is ~ Baiting of our carnivores should be absolutely illegal. It breaks down our relationship with the wild.
Categories: Blog, Farming with CoyotesMay 18, 2012Leave a comment