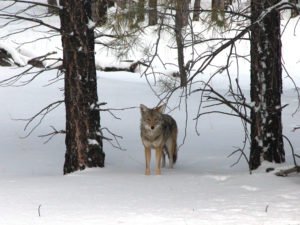 Do you know that over a century ago the Supreme Court of the United States supported the Law instituting the Public Trust Doctrine? And what is this doctrine about ? This Law states that wildlife are OWNED BY NO ONE, and are to be held in trust by the government for the benefit of present and future generations.

This doctrine does not specify certain wildlife…it refers to ALL wildlife. The “management” of wildlife in the United States is primarily carried out by individual states.  So the State of Maine is required by law to fulfill the mandate of the Public Trust Doctrine….for all our wildlife.
In addition to the Public Trust Doctrine, Congress also passed the Federal Aide in Wildlife Restoration Act during the presidency of Theodore Roosevelt. This act set a precedent for the role of Science over partisenship as the proper tool to discharge wildlife policy. So as a scientist, I want to ask why a law has just been passed in Maine to raise $100,000 a year to kill coyotes. First of all, Coyotes belong to No One, they belong to the land, in which daily, by their lives here, are creating healthy ecosystems for us all.  Our science tells us that coyote’s presence here in Maine BENEFITS all of us, and will continue to do so for future generations.  So this extreme Persecution of coyotes is breaking the Public Trust Doctrine.
The citizens of Maine elect their legislators, and give them the responsibility to adhere to this Public Trust Doctrine. They have failed the people of Maine, and the health of Maine’s landscape. And why? Partisenship!  I encourage our Maine people to SPEAK UP.  Contact your local representatives and senators, and let them know that this law needs to be done away with. And instead of laws that are institued to persecute coyotes, laws must be put in place to protect them.
Categories: Blog, Protection of CoyotesMay 26, 2012Leave a comment