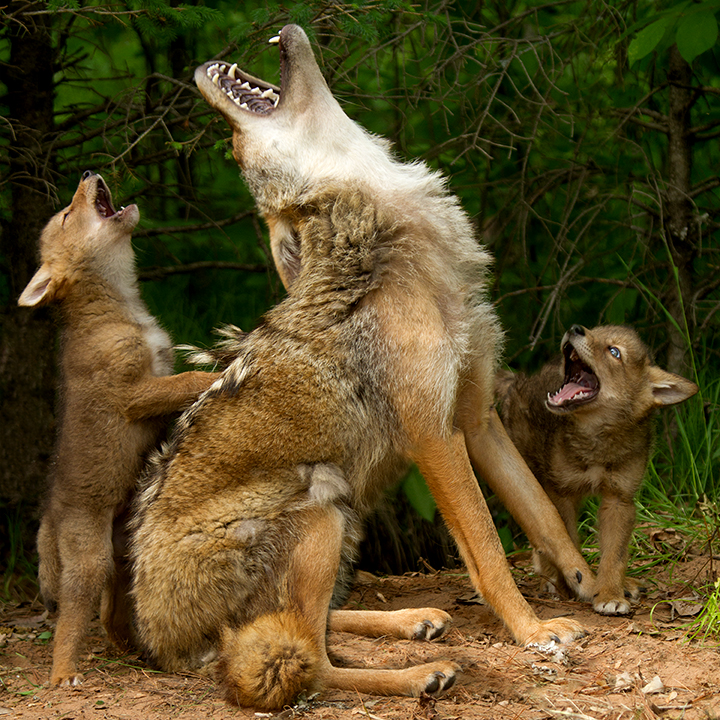 This wonderful photo by Debbie DiCarlo titled “Howling Lesson” depicts young Coyote pups talent for song, as they join their mother in the happy event.

We shall be hearing more of Coyote’s song now that Spring will soon be here….and the pups will soon be born. So I wish to share a piece written by Brian Mitchell, PhD, Adjunct professor at the University of Vermont ~ Opening a window ever a little bit more to the Wonder of this complex and amazing carnivore we share our landscape of Maine with.

“As the sunset colors fade from purple to black, the forest is dimly illuminated by a first quarter moon. An eerie sound breaks the calm. It is not the long, low, slow howling of wolves that can be heard further north, but the group yip-howl of coyotes: short howls that often rise and fall in pitch, punctuated with staccato yips, yaps, and barks.

When people hear coyote howls, they often mistakenly assume that they’re hearing a large pack of animals, all raising their voices at once.  But this is an auditory illusion  called the “beau geste” effect. Because of the variety of sounds produced by each coyote, and the way sound is  distorted as it passes through the environment, two of these tricksters can sound like seven or eight animals.

Group yip-howls are produced by a mated and territorial pair of “alpha” coyotes, with the male howling while the female intersperses her yips, barks, and short howls. “Beta” coyotes (the children of the alpha pair from  previous years and current year pups may join in if they are nearby, or respond with howls of their own.  And once one group of coyotes starts howling, chances are that any other alpha pairs nearby will respond in kind, with chorus  after chorus of group yip-howls rippling across the miles.

I spent seven years studying coyote vocal communication during my dissertation research at the University of California, Berkeley. While eastern coyotes are a larger and distinct subspecies from the western coyotes that  I worked with, the basic findings of my research and the work done by others applies to all coyotes.

The first, the group yip-howl, is thought to have  the dual purpose of promoting bonding within the  family group while also serving as a territorial display. In other words, the coyotes are saying “we’re a happy family, and we own this turf so you better keep out.” In a sense, the group howls create an auditory fence around a territory, supplementing the physical scent marks left by the group.

Coyotes will also howl and bark separately. This second type of song is virtually always an indication of disturbance or agitation, and in my experience, the higher the proportion of howls, the more agitated the coyote is. Coyotes will howl and bark at neighbors who intrude  on their territory, and at dogs, people, and other  large animals that they perceive as a potential threat.

My research documented that coyote barks and howls are individually specific. Much like we can tell people apart by their voices, there is enough information in coyote vocalizations for me to tell individuals apart.  If, as I suspect, coyotes can distinguish each other  by their song, it would not be analogous to the animals constantly shouting their own names; it would be more akin to our ability to recognize Marlon Brando because of the distinctive timbre and cadence of his voice.

Characteristics including dominant pitch, duration, how quickly howls rise and fall in pitch, and tendency to “warble” while howling all distinguish one coyote from  another. For howls, this individual distinctiveness does  not fade with distance. I was able to record and identify individual coyotes over a distance of greater than one mile. Given their keen hearing, it is likely coyotes can discern individual howls at much greater distances  —three miles or more on a calm night.

Barks, on the other hand, degrade quickly over distance, with the higher frequencies fading first. This makes it theoretically possible for coyotes familiar with an individual (say, a mate or family group member) to determine roughly how far away that individual is, based  on the proportion of high frequencies in the barks.

Imagine a scenario where a lone coyote is patrolling  the territory boundary and comes across an intruder.  He starts barking and howling, and his mate and beta children come running to the right place because his howls indicate how agitated he is, and his barks allow his family to pinpoint the direction and distance to his location.

Although I was not able to prove that coyotes can do these  tasks, the information needed is present in their calls and  there are strong evolutionary advantages to learning  how to use it. We still have much to learn about coyote vocal communication. Even after years of studying coyote calls, I was barely able to scratch the surface. These tricksters hold their secrets tightly.”