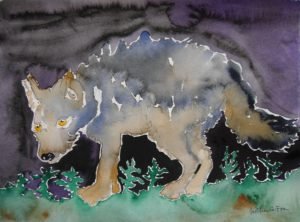 This poignant watercolor by Maine artist, Kathleen Fox was inspired by her own personal experience of catching sight of a starving small Coyote pup alone in the forest at night.

And why was this  small Coyote pup there alone without the protection of his parents…..his parents were killed at a time in the pup’s life when he needed them for his survival.

And why were his parents killed….because they were Coyotes….and there is NO PROTECTION for Coyotes in Maine.   Because there are NO LAWS in Maine to control the human behavior of those individuals who seek recreation by killing this important carnivore…..many coyote pups that will be born this Spring, will be orphaned long before they are able to survive on their own. They will die, suffering from starvation.

A short time ago I read an article in which one of these individuals expressed why he loved “the sport” of killing Coyotes.  These are two of his reasons ~ He likes the “challenge” of “outsmarting them…it’s enjoyable” and “I enjoy it because it is me against them”

SO IT IS FUN…IT IS A CHALLENGE….IT IS A SO CALLED SPORT. GOING OUT AND HAVING FUN…BY KILLING ….JUST FOR THE FUN OF IT!  When will we as a society look to the ETHICS of how we relate to our fellow beings on the planet?  Why is it that we allow laws to be in place that give free reign to these violent activities toward our wildlife.

E. O. Wilson, an esteemed ecologist wrote, ” Once a group (Coyotes) has been split off and sufficiently dehumanized….any brutality can be justified, at any level, and at any size of the victimized group.” in this quote, E.O. Wilson was referring to how we humans treat our fellow humans….but same holds for how we view and then treat non-human beings…..like Coyote.

It is interesting that I also had the opportunity to read about a life long hunter, trapper in Wisconsin, Rick Hanestad. He has been trapping and killing coyotes all his life until ONE DAY.  His grandfather who owns a 1,000 acre farm gave an individual permission to kill coyotes there. Well it just so happened that this person killed a lactating female coyote.

Hard core hunter trapper that Rick was, it still did not sit well with him.  He knew then that there were pups out there somewhere.  After searching and searching for three days, he finally found the den….with 5 helpless tiny, blind coyote pups sqealing in hunger. He still wasn’t sure if this was the mother who had been killed.  So he left and came back two days later. What he found….four of the tiny pups had died of starvation, and only one was hanging on.

He took the tiny pup home and cared for it…..and as the little one grew….he found out who Coyote really was. This was a man who killed many coyotes in the past….trapping them and then beating them to death. He said, ” I cannot tell you how this coyote turned me upside down. I feel like I am fightling for the life of my relative.”….he found out for himself that we are all connected….and you know what!

HE LET HIMSELF BE TURNED UPSIDE DOWN!  See the photo of “Wiley” the orphaned pup when he was being nurtured back to health.  (Remember…this is NOT a photo of a “pet”) 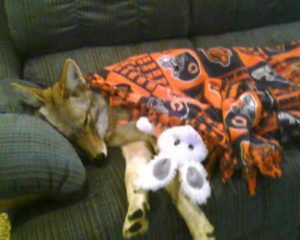