Rachel Carson and the Balance of Nature

Rachel Carson and the Balance of Nature 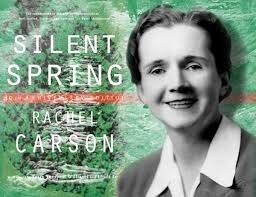 YOU AND I LIVE IN A WORLD THAT IS HEALTHIER FOR ALL LIFE BECAUSE OF THE WORK OF THIS ONE WOMAN BIOLOGIST!

In her book, Silent Spring she alerted the world of the very dangerous road our species was taking by the massive use of powerful, toxic chemicals and the continued dropping of practice A-Bombs and H-Bombs on our planet in the last century.  Restraint was placed on this behavior, but we have a very LONG way to go yet.

When it came to the use of toxic chemicals used as pesticides, the perception was that humans should CONTROL NATURE ….that nature needed to be controlled by us.

When responding to a group of chemical company executives who were challenging her, she answered: “Now to these people apparently the Balance of Nature was something that was repealed as soon as man came on the scene. Well you might just as well assume that you could repeal the law of gravity.  The Balance of Nature is built on a series of relationships between living things, and between living things and their environments. You just can’t step in with some brute force and change one thing without changing many others..”

SHE MAY WELL HAVE BEEN SPEAKING OF COYOTE ~ The life and work of this important carnivore is related to all other life. And so why does our society continue to allow the use of brute force on them?

Categories: Blog, Returning to our Place in NatureJuly 6, 2014Leave a comment

The Difference between Hunting and Killing
September 6, 2022