Raju the Elephant and Coyote, if they could Speak

Raju the Elephant and Coyote, if they could Speak 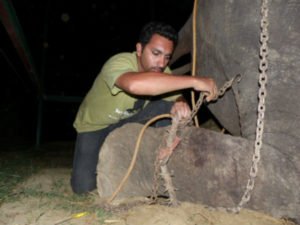 Raju being freed of chains

IF YOU HAVE NOT READ ABOUT RAJU’S RESCUE…SEEK IT OUT!

In short, he was poached from his mother when he was just a baby and has spent the last 50 years of his life being abused and tortured and starved. On the 4th of July he was rescued in India and is now in a Sanctuary there. The photo you see here is showing the removal of the chains and metal spikes that cut into his leg.

As I read about Raju’s tragic life, again I observed what humans are capable of in creating immense suffering in other intelligent, feeling life. But at the same time there are humans who use every possible course to end this suffering. It is so evident in this story.

BUT COYOTE’S STORY IS NO DIFFERENT THAN RAJU’S. There is so much violence to both species in the name of TRADITION and  “THIS IS JUST HOW THINGS ARE.”  Raju in chains and Coyote in leghold traps.

We want to evolve as a species …… and that evolution will express itself in our respect for all life….. and as a society to NOT TOLERATE cruelty to other beings … and that includes our fellow humans.

If Elephants and Coyotes could speak…..What would they want to tell us? 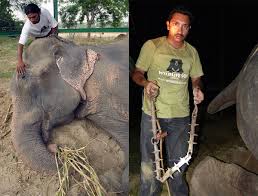