Pit Bulls and our Humanity

Pit Bulls and our Humanity 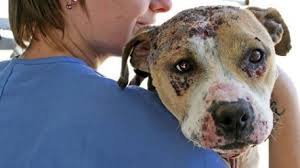 The first was about Dukey, a beloved Labrador who had cancer, and spent the last day of his happy life being showered with love and comfort….and then he was lovingly and respectfully put to rest.

The second was about Pit Bulls and the abuse and suffering  and prejudice they experience at the hands of humans. The photo you see here is a young Pit Bull rescued from the cruel fighting rings. Look at the wounds all over her face.

These two stories tell us something of our humanity that should haunt us. All dogs ….all dogs…..are amazing beings that we humans get to share this planet with. Yet we pick and choose those we respect and love and those we allow to be tortured and abused.

I ask you……WHO GAVE THE PITBULL THEIR NAME?  YES IT WAS HUMANS…IT TRULY WAS NOT THEIR MAKER. THEIR MAKER HAS ANOTHER NAME FOR THEM.  How we treat this one breed of dog is a reflection of ourselves as humans. We demonize them……but who is the demon in the mirror? No other dog is so vilified in the media; no other dog so discriminated against; no other dog so frequently abused; no other dog likely to be killed.

EVERY YEAR IN THIS COUNTRY 1.2 MILLION WONDERFUL DOGS ARE KILLED IN SHELTERS……..800,000 TO 1 MILLION OF THEM ARE PITBULLS.

ARE WE EVOLVING AS A SPECIES……ASK A PITBULL…ASK A COYOTE    WHAT WOULD THEIR ANSWER BE?