“The Power of One”

“The Power of One” 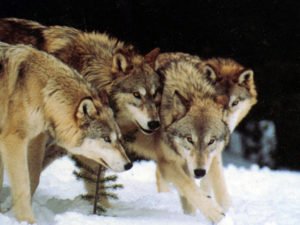 Wolves and coyotes, our top canine carnivores on this American continent, have worked out between them a relationship that has allowed both of them to flourish prior to pre-European settlement of this Land.  Two million wolves lived in North America and stable coyote populations were settled into the prairie landscapes when the Europeans arrived.

The European Americans had no plan to create any kind of relationship with our native carnivores, and so we all know that by 1920 every wolf in what is now the United States was slaughtered. They tried to do the same thing to Coyote ….but they didn’t know Coyote!

Several generations of us later, the wolves were reintroduced into Yellowstone National Park and the wilderness areas of Idaho under the Endangered Species Act.  But as quickly as the wolves came back, they are quickly leaving us again. Since Endangered Species protection was removed from these wolves, the states of Montana and Idaho immediately intiated wolf hunts….now Idaho’s is YEAR ROUND and Montana just included TRAPPING of wolves along with hunting them. SO I ASK YOU??? WHAT IS VERY WRONG ABOUT THIS SCENARIO? Why does this generation of Americans just pick up where the earlier Americans left off in the 1920s? Have we changed as a Nation? What needs to change?

But before we go there, let’s catch up with Coyote. Although European Americans and the generations that followed them could not slaughter all America’s Coyotes, they have created a world for this amazing canine that we in our genration should not tolerate. As Frank Dobie in his classic book, The Voice of the Coyote wrote, “The English Americans have never taught Coyote any language but that of lead, (bullets) steel, (traps) and strychnine (poison). So you see that both Coyote and fellow wild canine, the wolf in our generation ENDURE THIS SAME HUMAN BEHAVIOR…NOW GOING ON 500 YEARS

So what needs to change? We need to discover our own power again.  We need to discover the POWER OF ONE…that is you!  I say this because as I travel about Maine spending time with communities, I have found that people do not beleive they have any power to make a differecne in their world. I have actually had people say to me, “I have no power”.  And if you do not believe that you have power, then you do not have the power. The power for change comes from the many acts  that individuals perform….and they all begin to add up.
If you are concerned about the abuse heaped on Coyote here in Maine, when was the last time you contacted your Maine legislator….the ones that go to Augusta?  Do you know your legislators? SILENCE is what causes the continued killing and torture of our wolves and coyotes.  If the real people of Montana and Idaho spoke up, the killing of wolves will end.  If our Maine people speak up, the killing of our Coyotes will end.
YOU HAVE THE POWER….NOW USE IT!  If you need some help, contact me.
Categories: Blog, Protection of CoyotesJuly 15, 2012Leave a comment