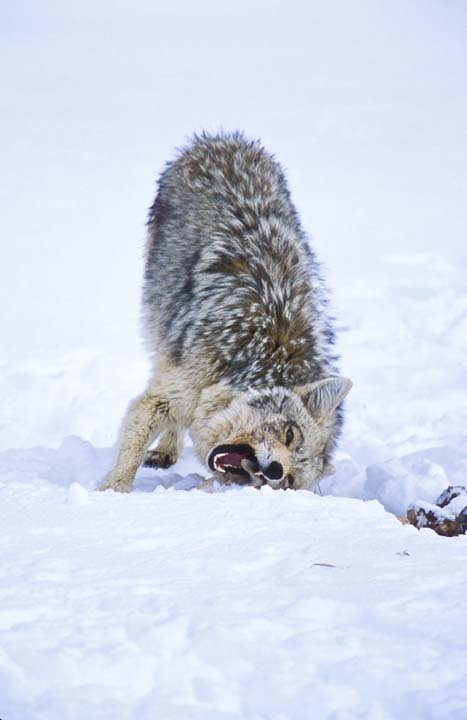 This poignant scene by photographer Jerry Mercier opens a window of survival for us humans to look into. Here Coyote is striving to take some minimal nourishment from the frozen leg bone of a deer….the flesh long since gone from it.

In Winter, carnivores starve to death ….and only the strong survive. As we ourselves move through the hardships of Winter, our respect for these amazing carnivores heightens.

And that is why it is so unthinkable that as a society we permit laws that allow their killing and exploitation when Coyotes are on the edge of survival in the Winter.

Farmers and Ranchers who understand survival seek to keep the Coyotes on their farms protected from human exploitation….. As rancher, Dayton Hyde, wrote in his classic book, Don Coyote, “They (Coyotes) had a sanctuary where they could hunt without being shot at and could concentrate not on staying alive, but on taking prey. Thus, throughout the course of a 24 hour period, our Coyotes could spend more time hunting because their diets were not limited to nocturnal species, and their ‘scrounging’ success was higher than that of coyotes suffering persecution.”

What Dayton Hyde understood so well was that human  behavior greatly affects Coyote behavior. And if he was to live well with his Coyotes, his Coyotes needed to be treated with respect….and given the opportunity to survive.