Do our Domestic Cats belong Indoors?

Do our Domestic Cats belong Indoors? 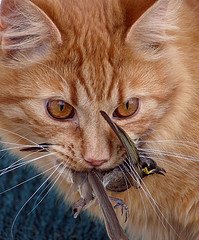 Cat with Bird in Mouth

Most often, when conversations about Coyote come up, you can be pretty sure that Coyotes and Cats will always come up, too.  But let me share this with you…Coyotes are once again here to teach us how to live on this Earth…just as they taught our Native Americans through their myriads of myths.  Coyotes are trying to tell us not only that our domestic cats should stay inside, but also that domestic cats have lost their wild ability to control their own populations…and we need to undestand that, and act accordingly.

The following is an article from Science Daily that I think spreads light on our need to oversee our domestic cats’ behavior ~ Somthing Coyote is trying to tell us.

“If you are like many people, and allow your cat to roam outdoors, there is a distinct possibility that at this moment, Fluffy is stalking an unaware bird, ready to pounce with deadly accuracy. “But wait, Fluffy is well fed”, you say. That doesn’t matter. Cats do not always hunt because they are hungry. They hunt because of an innate instinct for hunting. They hunt because it is, dare I say it, fun. “Well, Fluffy wears a bell and that will serve as a warning”, you say. No again. A bell is useless. Wildlife does not recognize the sound of a bell as a danger signal and even if they did, most cats learn to stalk and seize their prey silently, despite the presence of a bell on their collar.

Cats as our companions

Cats are companion animals, just as dogs are. They were domesticated thousands of years ago in Egypt and were brought to the United States a couple of hundred years ago. Cats evolved from wild species but are now considered their own separate species, Felis catus. Although they retain many of their wild characteristics such as appearance and the urge to hunt, they are now as domesticated as dogs are. Would you allow your dog to roam freely in the neighborhood?

Cats impact on birds and other wildlife:

You have no doubt read about the decline of our native birds. Many bird populations are in a serious and steep decline due to three major causes: habitat destruction, window bird collisions and cat predation. When you add up these losses, the math is chilling. Hundreds of millions of birds are killed by cats each year, and between 100 million and a billion die from window collisions. Factor in habitat loss and you are now looking at an unsustainable loss of these species.

Cats also kill prey animals such as mice, chipmunks, squirrels, rabbits and other small mammals, competing with native species such as hawks, owls, foxes and other larger wild predators that depend on these animals for their survival. Statistics show that the combined numbers of birds and small mammals killed each year by cats is close to one billion. Allowing a well fed house cat to compete for wild food sources places native predators at a disadvantage.

The Dangers Cats Themselves Face

You may be wondering if it is cruel to deprive your cat of an outdoor life. Absolutely not. Cats that are allowed outside are more likely to lead shorter lives. Exposure to transmittable and deadly diseases (such as rabies, feline leukemia, distemper and FIV), the constant threat of being hit by a car, as well as being attacked by a dog or a larger predator such as a fox are very real and likely possibilities. In addition, there have been many publicized cases of cats found stabbed, burned and shot by humans. Letting your cat outside can also be a risk for you: cats can contract diseases such as rabies and toxoplasmosis, both of which can be transmitted to humans. Furthermore, an outdoor cat may carry parasites, such as ticks, fleas and worms into the home. Why expose your cat and yourself to these risks?

When you really think about it, the greatest gift you can give your cat is to allow it to live a pampered, spoiled life inside your home. For more information on how to keep your kitty a happy indoor kitty, please visit the following website: http://www.abcbirds.org/abcprograms/policy/cats/materials/outin.pdf