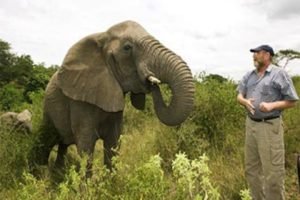 I would like to alert you to another outstanding book that I have just placed on our reading list here ~ called The Elephant Whisperer by Lawrence Anthony. So again I must give my reason for offering a book about Elelphants in far off Africa. The reason ~ though this book is about this amazing man’s relationship with wild elephants that he saved from certain death at the hands of humans, it is also about his awe of the relationships and communication these amazing beings had among themselves…and with him…because he was open to it…he reached out….he trusted…he respected…he offered sanctuary from human cruelty. And our relationship with Coyote?

As I read the book, the author often expressed what he almost couldn’t express in words, of the rich and wonderful life he lived because he opened himself up to these wild beings…and they gave back to him a piece of their inner life. He so eloquently expressed at the end of the book that we as humans cannot truly be whole without allowing into ourselves a “world that we cannot define.”
After I finished this life enriching book, I went on to read a Graduate Thesis of a Biologist who did Coyote research here in Maine.  The Thesis began with words similar to these ~ “We made use of 140 carcasses”…then went on to say that he stole 12 coyote pups away from their den and their parents to keep them captive and observe their behavior. I went from a book of expressing respect to a thesis that spoke of coyotes with immense disrespect….the carcasses….their dead bodies…not living, breathing, feeling, intelligent beings….but carcasses. What do we really learn from “carcasses”? What do we learn about wild coyotes and their true social and complex communication and interactions by unethically stealing them from their parents? A little later he makes note that they were checking the “stomach contents of the carcasses” and many were empty…stating on the side that coyotes are often vomiting when caught in traps. Do you wonder why?
So I bring before you two perspectives of our relationships with intelligent, complex non-human beings. Which one is life enriching…and ethical…and wondrous. And which one leaves you with a knot in your stomach?
Categories: Blog, Creating Life Enriching RelationshipsOctober 28, 2012Leave a comment